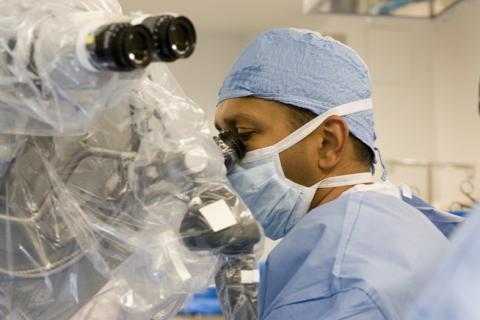 On April 24, 2012 neurosurgeon Sandeep Kunwar performed the 1000th transsphenoidal surgery for a pituitary adenoma since the California Center for Pituitary Disorders (CCPD) was established at UCSF just five years ago in May 2007. Dr. Kunwar’s patient was a 27-year-old man with acromegaly caused by a 2- cm, growth-hormone-producing pituitary tumor. He diagnosed himself after coming across an article about acromegaly and recognizing that he had many features of the disease. He has been disease-free since his surgery at the CCPD.

The CCPD averages more than 200 pituitary surgeries and over 1,500 outpatient visits per year, making it the one of the most active and specialized pituitary treatment centers in the nation. Studies of transsphenoidal surgery outcomes have consistently shown that larger surgical caseload, for hospitals and individual surgeons, correlates with superior patient outcomes. A large surgical caseload has been defined in the medical literature as 25 or more admissions per year.

Looking through a microscope, neurosurgeons guide small, specially designed instruments through the endonasal corridor to remove pituitary tumors. It allows for the complete removal of microadenomas and macroadenomas as large as 5 cm in diameter and preservation of pituitary gland function. Eighty-five percent of patients return home the day after surgery and there are no intranasal or sublabial incisions. Complication rates are extremely low at high-volume centers; at UCSF there has been 0% mortality over 1,000 operations and <1% major morbidity. By completely removing the tumor, often in one piece, there is minimal risk of recurrence or need for postoperative radiotherapy.

For larger macroadenomas, extended transsphenoidal surgery –developed in part at UCSF– extends the operation into the brain cavity without requiring a craniotomy. An endoscope may be used after removing the tumor to illuminate the entire surgical cavity and ensure that there is no residual tumor tissue. This approach can also be used for other tumor types such as meningiomas, chordomas, and chondrosarcomas, as well as clival tumors, craniopharyngiomas, and tumors of the hypothalamus or optic nerves. Of the 1,000 pituitary tumor surgeries performed in the last five years at the CCPD, approximately 900 of them have been direct endonasal transsphenoidal surgeries.

Like the microsurgical approaches, the endoscopic approach is performed through the endonasal transsphenoidal corridor, does not produce scarring, and results in low incidence of recur rence. Unlike the microsurgical approaches, in which an endo scope is mainly used to perform a final inspection after the microsurgical resection, the pure endoscopic transsphenoidal approach relies on an endoscope to illuminate the surgical corridor throughout the operation and no microscope is used. The endoscope is inserted into the nostril to directly illuminate the passage and tumor, which can some times be more advantageous than having the light come from a microscope positioned outside the nostril. The closer proximity of the light source can potentially light up areas that may be cast in shadow during a traditional transsphenoidal approach, such as the cavernous sinuses and the third ventricle. The endoscopic approach is best for large tumors, which may have extended into nooks and crannies, such as the third ventricle. Otolaryngologists are often involved in these surgeries to assist with the removal of soft tissue from the nose and to manage follow-up with patients to address nasal health. Endoscopic surgery accounts for the vast majority of surgeries that are not done through a microsurgical approach at the CCPD.

Very rarely, pituitary tumors invade other areas of the brain and surgery requires a craniotomy — an operation in which a portion of the skull is temporarily removed, followed by retraction of the frontal or temporal lobes of the brain to gain access to the tumor. Instances in which the tumor has violated the tissue plane account for less than 1% of cases and are generally approached through a craniotomy.

Gamma Knife radiosurgery is a noninvasive procedure that delivers a single, finely focused, high dose of radiation precisely to the tumor. This type of radiosurgery has submillimeter accuracy in delivering the treatment dose, resulting in minimal damage to the surrounding tissue and producing few side effects. It can be used to treat pituitary tumors as small as 2 mm in diameter. Radiosurgery may be used as an adjunct to surgery or as primary treatment for certain recurrent tumors. It can be especially effective for treating hormonally active tumors that have invaded into the cavernous sinus. The UCSF Gamma Knife team has over 20 years of experience with radiosurgery and has treated over 3,600 patients to date.